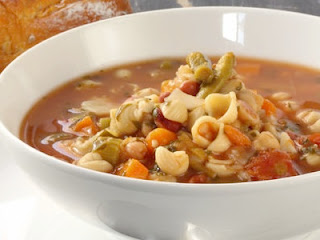 This just happens to be one of my favorites and I could probably eat it almost everyday and be perfectly content. While there are many different interpretations of this wonderful soup I like mine to be made with the following: beans, onions, celery, carrots, stock, potatoes, tomatoes, and ham.

Traditionally it is said that Minestrone was made with ingredients that were pooled from other dishes, often side dishes or "contorni" plus whatever was left over.

"There are two schools of thought on when the recipe for minestrone became more formalized. One argues that in the 1600s and 1700s minestrone emerged as a soup using exclusively fresh vegetables and was made for its own sake (meaning it no longer relied on left-overs), while the other school of thought argues that the dish had always been prepared exclusively with fresh vegetables for its own sake since pre-Roman times, but the name minestrone lost its meaning of being made with left-overs."