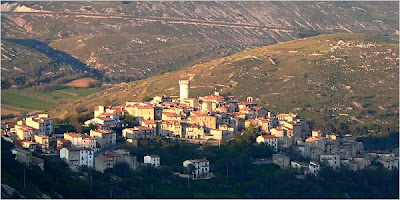 Montepulciano d' Abruzzo (D.O.C.) is refering to the grape varietal "Montepulciano" which in this case is being grown in Italy's Abruzzi region. The grape variety Montepulciano is capable of creating deeply colored, rich red wines with impressive blackberry fruit, and spicy peppery qualities. The varietal is thought to be indigenous to the Abruzzi region but is also grown in other regions and is the base for other wines in Italy. For example Rosso Conero (D.O.C.) from the Marches region and Cerveteri and Velletri (D.O.C.) from the Latium region.
Montepulciano 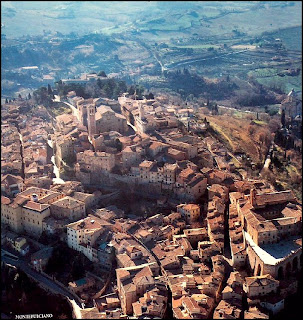 Vino Nobile di Montepulciano (DOCG) is a wine that is made in the hilly area around the town of Montepulciano, southwest of Siena in the eastern portion of Italy's Tuscany Region. The designated area is actually situated inside the large Chianti subzone of Colli Senesi. It's also important to note that Vino Nobile di Montepulciano was the very first DOCG in Italy. (First vintage in 1983). Vino Nobile wines are made from a minimum of 70% Sangiovese, 10-20% Canaiolo, and up to 20% of other varietals. (no more than 10% white grapes).
Posted by thomas at 8:22 PM No comments: 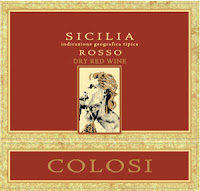 I have tasted this wine in the past and have really enjoy it for it's nice pure fruit and amazing quality for the price. I have to say that it still impresses me vintage after vintage. It made from 100% Sicilian Nero d' Avola and is aged 6 months in Slavonian oak and 4 months in bottle before release.

What's really astonishing is that there was 400,000 bottles produced of this stuff for the vintage! Now thats a large production wine but the quality is absolutely amazing. I wish some of the new world producers would focus on producing this kind of quality in there larger production, introductory wines.
On the nose I get blueberry, black cherry creme pie, vanilla, raisin, prunes, sugared dates, leather, and tobacco. It's a really fantastic bouquet that just keeps developing in the glass. On the palate I get flavors of black cherry, prune, raisin, vanilla, oak, and dark chocolate. There is also a trademark Italiano earthiness to it as well, which comes across quite stylish and makes you want to whip out the pasta. I absulutely adore this wine for the price!
Average Retail: $8-12
Vino Blog Rating: 8/10
Click here to find out more about this wine
Posted by thomas at 11:47 PM No comments:

Roberto Voerzio produces some of the best Barolo in the region. His rise to success is largely based on his new world approach of fashioning his wine away from the traditional tannic Barolo style. He is also known for using some of the lowest yields of fruit in the Barolo zone. Production is very limited and the winery makes less than 4000 cases per vintage, which equals less than one bottle per vine.
The Brunate vineyard makes the finest and raciest Barolos, which are defined and firm, and finish with big, ripe tannins and very good length. The wines also score amazingly high in wine publications such as Wine Spectator, Enthusiast, ect.
The 2005 vintage is only a mere 220 case production so I was lucky enough to be able to taste it. On the nose it shows amazing aromas of super ripe currant, raspberry, and blueberry, along with a touch of vanilla, toast, and cedar.
It's a full bodied wine with huge ripe tannin and a seductive texture. Flavors of red currant, blackberry, mineral, spice, and a touch of mocha liqueur all grace the palate with a stunning concentration and firm but surprisingly ripe and sexy finish. This wine is nothing short of brilliant but may be some what impossible to get your hands on unless purchasing it from a collector or an auction. Awesome stuff!!
Average Retail: $250-300
Vino Blog Rating: 10/10
Click here to find out more about this wine
Posted by thomas at 9:45 AM No comments: 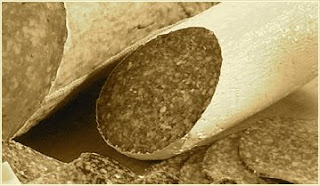 Genoa salami is a variety of salami commonly believed to have originated in the area of Genoa, Italy.

Commonly, Genoa salami is a pork salami, although some producers mix in beef and veal as well. In addition to the loosely chopped pork, Genoa salami also includes garlic, salt, fennel seeds, whole peppercorns, and a small amount of white wine. The peppercorns create explosions of spice in the finished product, making Genoa salami a rather zesty food to eat. By tradition, white peppercorns are usually used in Genoa salami, with black peppercorns studding cotto salami.

Salami is made by chopping meat and spices and stuffing them into a casing. The resulting meat is cured, usually through a process of drying and smoking. Once cured, a salami can be stored at room temperature until it is cut open. The curing technique ensures that meat is available year round.

Several things distinguish salami from other cured stuffed meats. The meat in salami tends to be coarsely cut, so large chunks of meat and fat are present in the finished product. In addition, the dry cure used to preserve salami results in a very dry meat which is also slightly crumbly. Salami also tends to be more spicy than some cured meats, and it may have a slightly fermented flavor, depending on how it was handled and cured.
Posted by thomas at 4:06 PM No comments:

The 2007 Stella Montepulciano d' Abruzzo is made from 100% Montepulciano grapes grown in hillside vineyards on Italy's Adriatic coast. Stella is the creation of Leonardo LoCascio who, in partnership with growers and winemaker Danilo Chini, have put together a series of wines that exemplify the character of the varietal and the region. The wine is aged for six months in stainless steal tanks and a further three months in bottle before release.
On the nose I get some very nice black cherry notes as well as some additional aromas of savory dark chocolate, spice, and a hint of leather. This wine definitely has an Italian type bouquet that expresses a sense of place but the fruit is quite nice and pure as well.
On the palate the black cherry flavors continue to impress but this wine is quite dry and slightly rustic in nature. There is a nice coco note that combines with a touch of leather that eventually finishes dry with some cranberry and cherry notes.
I like this wine for it's simplicity, sense of place, and the obvious ability that it would have to pair with some hearty Italian cuisine. I would suggest perhaps Osso Bucco or a meat lovers style lasagna.
Average Retail: $7-8
Vino Blog Rating: 7/10
Click here to find out more about this wine
Posted by thomas at 12:50 PM No comments: 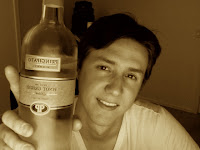 This 100% Pinot Grigio is sourced from hillside vineyards throughout the provinces of Trentino, the Veneto, and Friuli-Venezia-Giulia, the three districts that together form northeast Italy’s Tre Venezie region. The grapes are harvested by hand and then during vinification the Pinot Grigio, the grape skins are left in contact with the juice, resulting in a natural delicate rosé hue.

The Principato label has been in existence sine 1978 and has become a well known brand in the United states and I think this wine might even have been an exclusive for a wine in the Olive Garden restaurant chain. (At least locally here in Arizona)

It is a lightly colored blush wine that has a pinkish orange like hue and It almost has the color of lightly colored salmon flesh. On the nose the wine shows aromas of citrus peel, delicate floral aromas, and perhaps a touch of wet concrete. On the palate the wine is light and fruity, and even has a touch of residual sugar. Soft citrus notes combine with just the faintest hint of light red fruit and finish with a crisp, delightful, and pleasant aftertaste.

I can see this wine pairing nicely with light appetizers, fresh seafood and Asian-inspired cuisine. I do believe it drinks nice on its own and would be a great picnic style wine that would be fun with cheese and crackers.

Click here to find out more about this wine
Posted by thomas at 9:41 PM No comments: